The six and 1/2 hour drive to North Carolina (and then again back) this past week was a little quicker than I remember, because for once I remembered to load an audiobook onto my iPod.  For some reason, listening to spoken-word makes time pass a lot more quickly than music, particularly if the writing is engaging.  Lewis Black got me to and from Chicago in 2005; Tom Clancy (!) made my 2000 Baltimore trip a little more bearable (note to Jonas: the visit was great; the drive, not so much).

It got me thinking about bartending, listening this time to Anthony Bourdain’s Kitchen Confidential. And while there’s a lot of material in there that is really not at all applicable to the bar world — the rules about eating out, stories about his time at CIA and his inspirations for becoming a chef — there’s a lot that is.  As such, I think it shoudl be required reading, both for aspiring bartenders and grizzled veterans.

There’re a lot of different bar atmospheres out there, from corporate restaurant sports grilles to upscale martini- and cigar-specialists to hole-in-the-wall places like Bailey’s to the Cheers-esque bar where I am now.  To the average customer, these places have nothing in common outside of the sale of alcohol; they attract different crowds, serve different specialities, and contain entirely different worlds.  Behind the scenes, though, it’s all the same, and it was listening to a typical (if fictional) day-in-the-life segment from Bourdain’s book that I realized that.

No matter how my bar shapes my attitude on behavior on shift (and the ways I carried myself between Bailey’s and some of my corporate gigs in the past couldn’t have been more different), the job still involves the same things.  There’s inventory and ordering (degrees of detail may vary, but the routine doldrum at the core remains identical).  There’s talking to people you don’t like, dealing with drunks, hoping the regulars will come in to delay the impending onset of insanity by an hour or two.  There’s money — way more than the job deserves, sometimes, and other times way less.  There’s cleaning up the bathrooms or the blood in the entryway, dusting the bottles and ceiling fans, wondering why the owners haven’t fixed the lights yet, wishing the distributors would get your order right just once, haggling with bands about their payout.

Beyond all this, though — for better or for worse, depending on whether you view the list above as the nightmare behind the glamour that you had never considered, or really not so worse than any other average Tuesday night — is the group of people you work with, your coworkers and peers.  The boss (owner or manager) is obviously somewhat important, as they control the overall atmosphere of the working environment.  But it’s the other bartenders, the barbacks, the security guys and cocktail waitresses that will make the job worthwhile or not.

Much like Bourdain describes his kitchen crews, a given group of bartenders is a pirate gang, a military troop, a family.  If you find yourself working behind a bar where this isn’t true, things will fall apart.  I don’t care how talented your crew is; someone will go postal, or the bar will simply peter out.  If you’re a united group, though — and I don’t mean that you want to spend every minute of the rest of your lives together, or even that there’s not a single bad apple in the basket, because there’s always one — you’ll make money, have fun, and get through all the bullshit that is inherent to the selling and serving of alcohol. What made Bailey’s my favorite bar to date — behind and in front of — and what made it so hard to let go of at the end was the group of us.  Jason, Mariel, Daniel, me, Kristinn, Heath, Rick — it was a good mix, a rare grouping that worked well (enough) as a whole.

There are a lot of other things that should go into your choice of places to work (if you have such a choice, of course): clientele, ambience (including the bands that play in your live music club — if you think you hate Genre X of tunes now, wait until you have to listen to it at painful volumes six nights a week), opportunities to grow. But any and all of these things can and should fall second to whether or not the people behind the bar are your kind of folk or not. 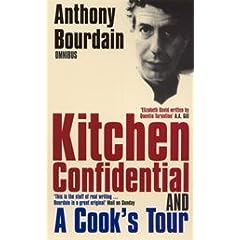 In the meantime, find a copy of Kitchen Confidential (and while you’re at it, pick up his other books, including his wonderfully instructive cookbook, Anthony Bourdain’s “Les Halles” Cookbook: Classic Bistro Cooking or seek out an episode or twenty of No Reservations) and keep in mind that there’s a lot of parallel between the worlds of chef and bartender.  If you’re not in the business yet, it’ll help prepare you for some of what you’re eventually going to encounter; if you’re behind a bar, you’ll recognize a thing or two, and maybe even learn something useful.

This site uses Akismet to reduce spam. Learn how your comment data is processed.